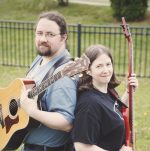 The Faithful Sidekicks are the award-winning acoustic filk duo of Eric and Jen Distad. They play (mostly) funny songs for all kinds of fandoms like Harry Potter, Lord of the Rings, Star Wars, Star Trek, Gaming, technology and they might even throw in an IT Sea Shanty for fun. With their eclectic mix of songs ranging from catchy Star Wars pop songs to a love song written entirely in SQL Code, they have something for nerds, geeks, and fans of all kinds. These Pegasus nominated performers have played at conventions and clubs around the US, Canada and Germany. They have released two CDs and a third CD, entitled Our Kind Of Strange, is due at the end of 2020.